Kronos (Ritual Miracle) is the best place in Dislyte for farming relics: War Machine, Snow Dowager, Wind Walker, Sword, Avatara, Master Grove, and Adamantine. At the moment, there are 16 difficulty levels in total.

In this guide, let’s take a look to see how the boss mechanics work, and the best team formations (squads) to beat the Kronos with ease! 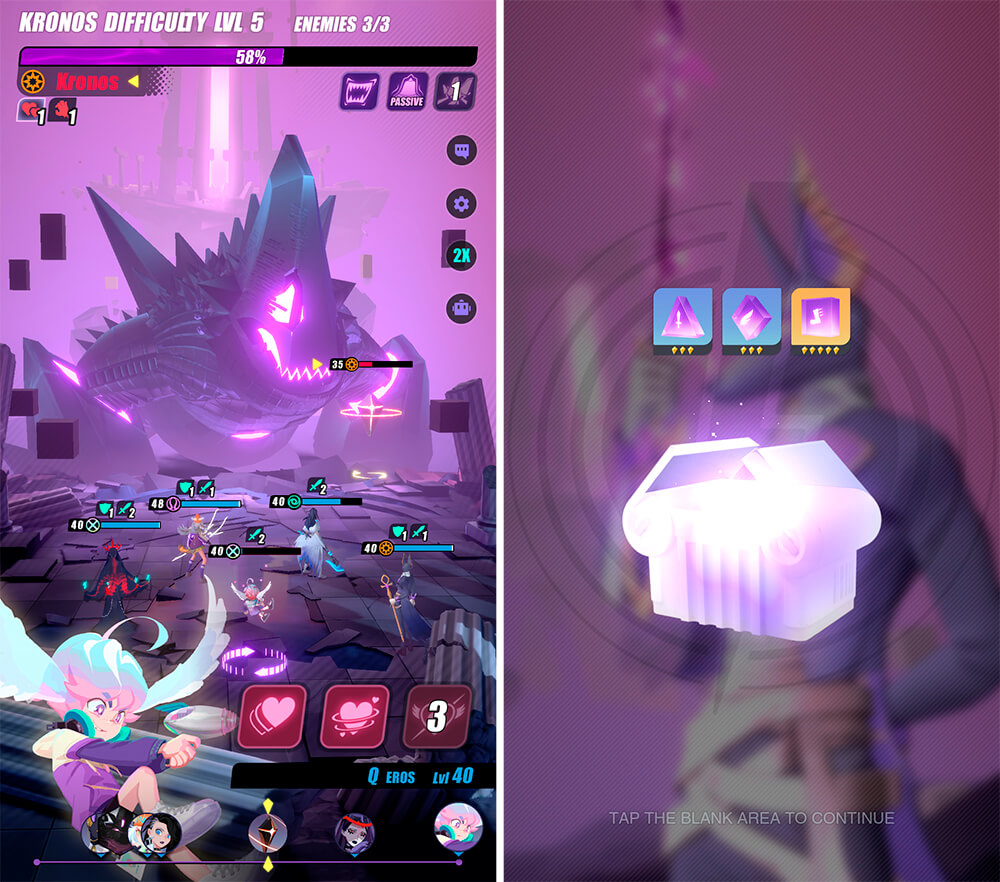 Kronos is a Ritual Miracle Boss focused on dealing high damage to your team in an ‘AoE’ (Area of Effect), with a strong single target damage ability that applies a Stun debuff.

The battle against Kronos is pretty straight forward, and he is usually the first Ritual Miracle boss that a player will encounter and work towards reaching the highest floor.

The most common strategy used against Kronos is to delay his turns and deal enough damage before he eventually takes his turn, so that your team doesn’t get hit with his strong ‘AoE’ and Stun debuff.

To reduce his turns, you’ll need the debuff; SPD Down, and the negative effect; AP Down, to control Kronos.

Kronos’ passive Death Knell grants a significant damage bonus against targets with relatively less HP plus a bonus turn upon the defeat of any such target.

Kronos’ Earth Shaker, on the other hand, can only target whichever enemy has the lowest percentage of remaining HP. An effective strategy against Kronos relies on healers to maintain a healthy team. 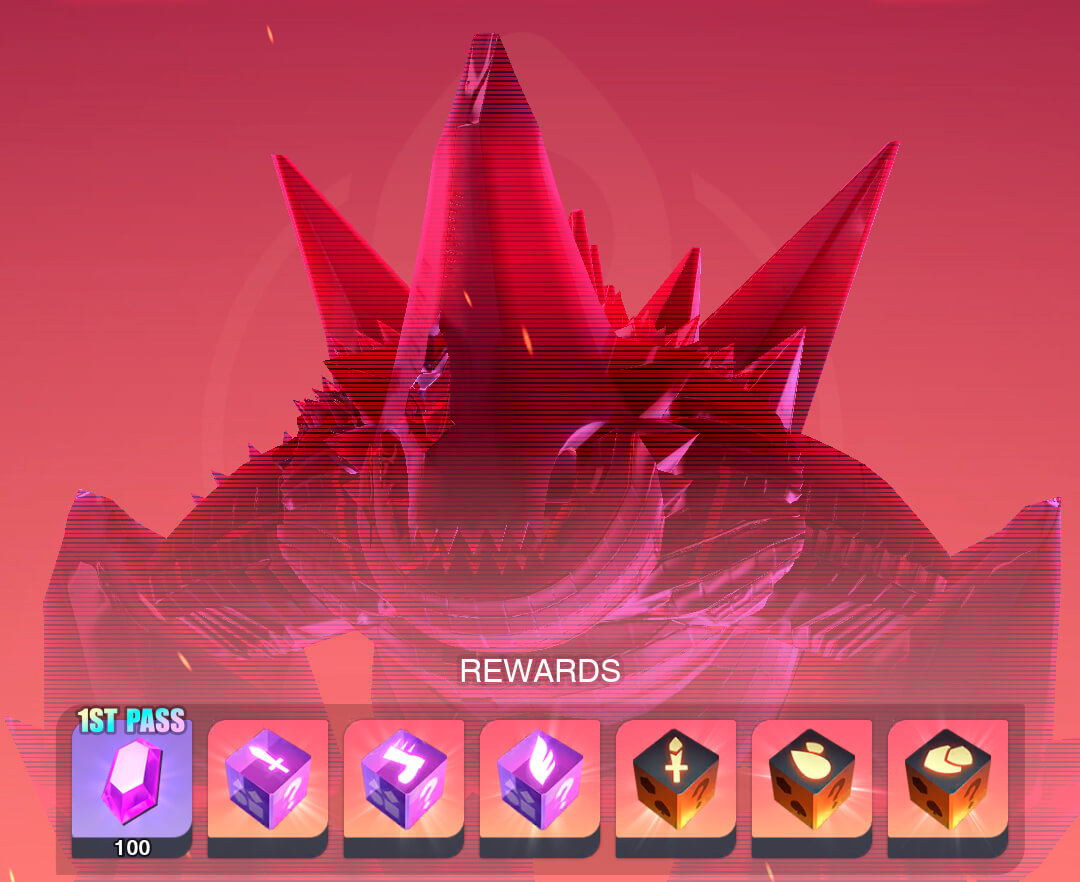 At first, let’s take a look at the Kronos boss skills to see how basically it the fight works so that we can find the best options to deal with this Dislyte boss.

Before you can get to the boss, you need to take down 2 small enemy waves first. They are easy to defeat, however sometimes they can take down your weak units, making it harder for you to defeat the Kronos. You want to take them down as soon as possible, and give your weak units enough HP/DEF to sustain through these waves.

Essentially, Kronos is a slow boss, heavily relying on one of his Tablet minions to increase his AP so he can take a turn to deal significant damage. Utilising a team that can reduce his AP and SPD will control the battle heavily in your favour, allowing you to kill Kronos at your pace.

Though don’t take too long killing Kronos, as he will eventually take a turn if you can’t keep his AP down long enough, meaning he can still defeat your team quickly.

If an Esper dies to Kronos’ attacks, his passive activates, granting him an extra turn which allows him to chain off multiple turns with hard hitting abilities to easily defeat your team.

Focus on Kronos rather than his Tablet minions, as spending turns attacking his minions will allow him to eventually take a turn whilst still on high HP, making him harder to defeat if any of your Espers have been defeated.

If you’re having trouble with Kronos, here are a couple of things you can do or check:

Below are some recommendations for Espers to use in Kronos that you can easily obtain for free:

We highly recommend purchasing the

Melanie Ripple x5 Esper Ripples from the Club Shop, which can summon the Esper

Melanie (Medusa) to help you apply AP Down once you obtain 30 Esper Ripples.

If you don’t have enough Disabler Espers that apply AP Down, we recommend keeping an eye on World Chat for Ripple Dimensions of:

If you don’t have enough DPS Espers, we recommend keeping an eye on World Chat for Ripple Dimensions of

If you don’t have enough Support Espers to help you sustain some of the damage or buff your team, we recommend keeping an eye on World Chat for Ripple Dimensions of:

This guide is for new and free-to-play players who are looking for easier ways to defeat the boss using easy-to-obtain Espers.

DPS heroes usually use 4-relic set War Machine to boost the ATK. Also, you want to use 2-relic set Fiery Incandescence (C. Rate %) on them if you have, otherwise using the counterattack relic set Sword Avatara is fine!

In general, you want to have ATK%/C.RATE and SPD on your main DPS units for the early teams. Later, you can replace C.RATE with C.DAMAGE and replace SPD for ATK% when you have strong relic sub stats.

For support units (Healers, Buffers, Debuffers, etc.) you want to use the Wind Walker set as it gives a lot of extra SPD, allowing them to cast their skills faster. It’s recommended to use 2-relic set Adamantite on them to give extra Shield, making your runs more stable. On the Relic Slot 6 (Mui II), it’s recommended to use SPD as the main stat.

Speed (SPD) is the best stat for support units as you always want them to be fast enough to cast their debuffs/buffs before your DPS units. Other main stats and sub stats are not really important, you just want to give them enough survivability stats (HP and DEF) so they can last through waves and hard hits from Kronos. Normally, support units are tankier than DPS units as you don’t have to focus on C.RATE / ATK% as the main stats.

This composition contains 4 free guaranteed Espers that all players obtain right from the beginning of the game.

Chang Pu is not a free hero but it’s super easy to pull her out from the Gacha as she is only a 3-star rare Esper.

After a few days, you will be able to get couples of Chang Pu copies without any issues.

As you progress further in the game, you will be able to obtain a lot better units and they will always deserve a slot in your team.

The above Espers provide much better utilities comparing to the free units in the starting team composition above.

Do note that you usually want to have a healer in your team no matter what, unless your team is super strong and can survive all hits with ease. Helena provides C.RATE Up Boost while Chang Pu offers better healing, choose what your team needs!

He is super strong for Kronos, offering a lot of AP Down and Speed Down debuffs. His skills also have great ATK%, allowing your team to speed up the runs easier. He also has the leader ability that speeds up your team, which is better than Mona’s leader skill for Kronos.

You can do some more tests with the other AP Down/SPD Up units, but in general according to my tests, Sander is the best.

She is another excellent DPS for Kronos. She is also extremely strong for Apep.

She has the AP Down debuff on her first skill, DEF Down & SPD Down on her 3rd Skill. The 2nd skill hits like a truck, applying a ton of Bleeds towards the Boss, which is super helping whenever you just need some extra damage to finish it.

She is probably the best AP Down hero in Dislyte as she also provides SPD Up for the entire team. She syngergies super well with

Sander if you already have him.

In term of AP Down, she is straightforward and much better than Helena or Chang Pu. However, do remember that you can stack AP Down debuffs, so it’s better to replace Q with Celine if you can.

He is made for Kronos. He has Bleeds and allows all other heroes to do more damage to the boss. Also, his captain ability increases all Esper’s ATK by a further 30% in Ritual Miracle and Sonic Miracle.

The below units are stronger than Q but might not be a better option to replace the other Espers.

Melanie is a good option for AP Down debuff. The passive skill makes her a super consistent unit for casting AP Down. However, she doesn’t add much other utility to your team.

She is better than Helena for most teams. If you have Sander being the leader, she really shines.

She is a decent choice for AP Down and SPD Down. She can land both debuffs with her 3rd skill but she doesn’t provide the SPD UP while Celine does. So in general, Celine is much better than her. The second skill gives an AP Up buff to one of the DPS units, making her a decent option for your team if you need some more DPS.

His leader skill is better than Mona’s skill as it allows you to use Crit Damage relics early. The only reason makes him not really the best replacement for Mona is because his 2nd skill deals some damage on himself, which can make Kronos sometimes 1-shot him. You can stack Adamatite Relics to give him more survivability or can also use your healers with good SPD to support him.

She is amazing in Point War and is also pretty good in Kronos. She doesn’t offer AP Down, which can make your runs a bit less consistent If you don’t have Lin Xiao or Sander in your team.

When she is in the right team comps, her ATK Down, ATK Down, and ATK Up debuffs can make your runs faster and more stable.

She is still better than Q anyway.

She is excellent for Kronos when in the right team. As she doesn’t offer DEF Down, it’s hard to replace Drew with her if you don’t have the right supports. So you would generally want to replace her with Mona in the early game. Also, since she doesn’t have the leader ability, you will also want to use Lewis or Sander in your team as well.

She is super strong when you stack up the Adamantite relics to buff her 3rd skill. Having 3 sets of Adamantite really skyrockets her damage.

Players receive random relics at random grades/rarities, and a decent amount of

Gold when defeating the Kronos.

Dribble is a Senior Moderator from the official Dislyte Discord server. He has been sharing a ton of incredibly helpful information for both new and advanced players, so make sure to check it out!
Login
7 Comments
Oldest
Newest Most Voted
Inline Feedbacks
View all comments

* Sanders/Suhua have max CD upgrades
* Sanders/Eira/Suhua have high speed (Melanie has only a little)
* Sanders/Eira/Melanie have high accuracy
* This team is somewhat slow since Sanders is the only DPS
* Best upgrade is probably Chang Pu >>> Top tier DPS so you don’t have to stall as long so it’s more consistent and a lot faster. I always beat Kronos really fast when I sub Chang Pu for a helper Li Ling or Lin Xiao.

That’s a nice team for all beginners! Thank you for sharing this!

Thank you! I have just updated it. Her name was previously Coco 😀

eira is also called malin here for some reason

Thank you a lot!