We will be taking Dislyte offline for a short time on March 1, 2022, 7:00-10:00 AM (UTC+0) to update and improve the game. Please note that you will need to download the latest update to continue playing and the update could be delayed or pushed forward unexpectedly. Lvl 5+ players at the time of the update will receive a 240 Nexus Crystal reward via in-game mail afterwards.

Remember: you will be unable to sign in during this time. 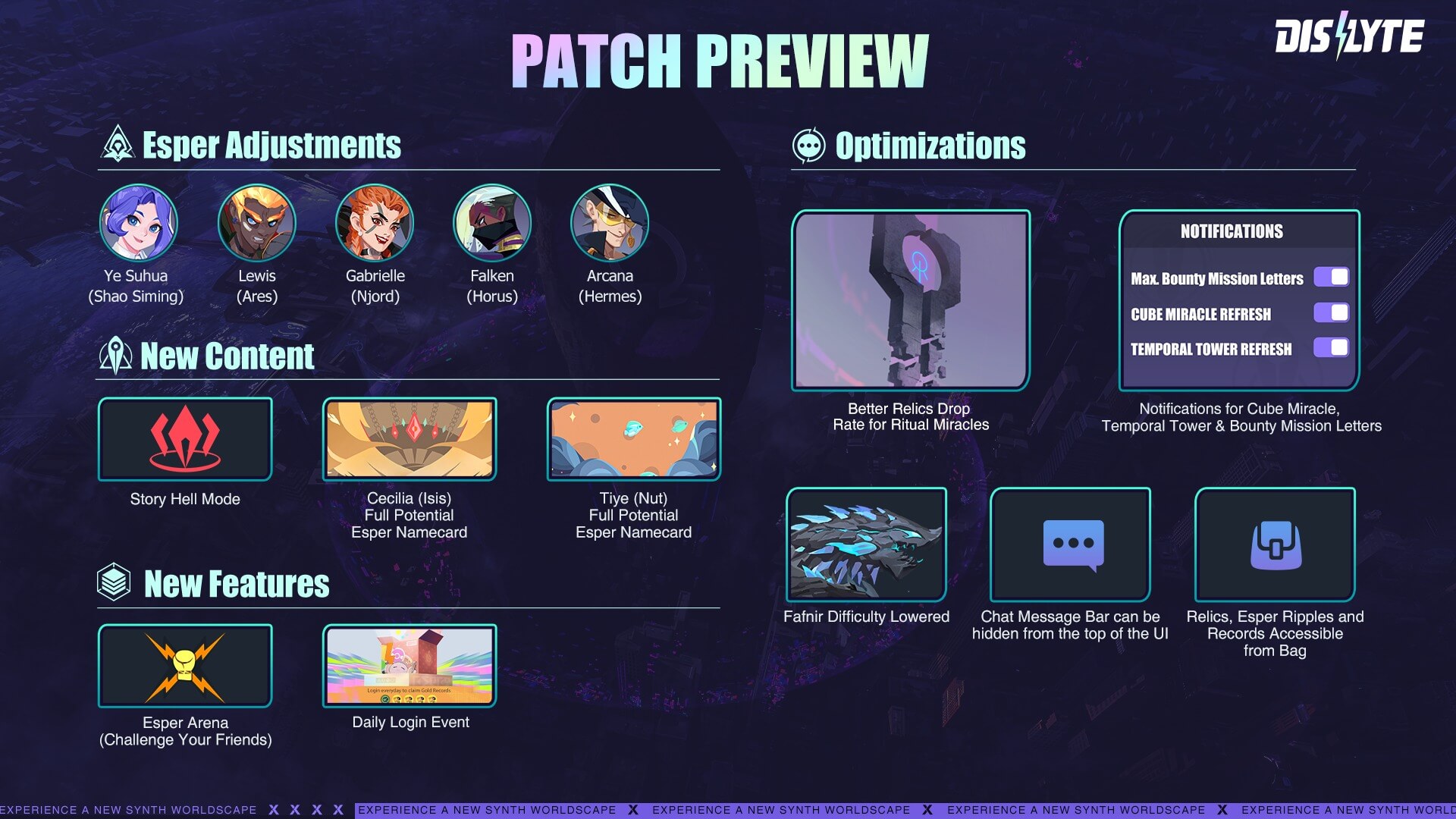 4. Union Parade sign-in rewards event:
– Event Time: 3/1/2022 (after the update)
– Event Details: Sign in to the game and claim epic rewards specially prepared by the Union! 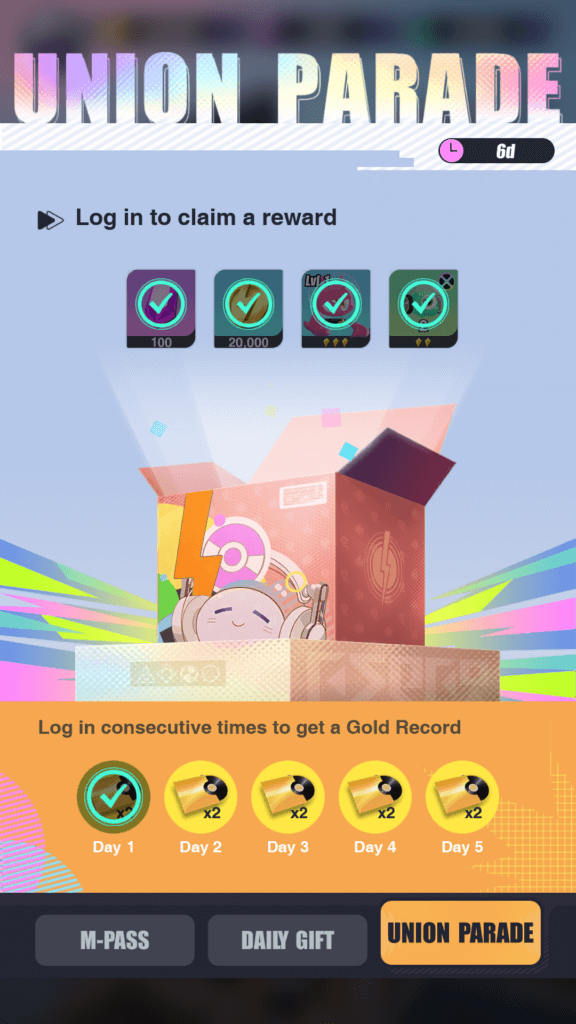 1. We’ve reduced the difficulty of the Fafnir boss challenge in the Ritual Miracle.

Ability 1 changes:
Previous: ATK all enemies and inflicts SPD Down for 2 turns with a 50% chance of inflicting Stun for 1 turn if unaffected by any debuffs. This attack deals extra damage the fewer enemies remaining on the field.

Current: ATK all enemies and inflicts SPD Down for 2 turns with a 50% chance of inflicting Stun for 1 turn if buffed. This attack deals extra damage when fewer enemies remain on the field.

Ability 3 changes:
Previous: Fafnir has multiple HP stacks and disables all enemies’ AP-related abilities when she is present. For each HP stack lost, Fafnir gains Andvari’s Treasure plus Immunity for 2 turns, retaliates against the last attacker by inflicting Icefield Abyss, and casts Dragonbreath. Fafnir further reduces target’s max HP by 25% if not debuffed when casting Icefield Abyss.

4. Unlocking features:
◇ You can now unlock new types of gameplay and features in the game after reaching certain levels, rather than clearing story stages.
◇ A notification pop-up window now appears after unlocking a new feature. Tap on [Go] to jump to the feature you’ve unlocked.
◇ We’ve adjusted the timeline for unlocking certain features. After the update, players may find that certain functions which were previously available are locked and require reaching a certain level first.

5. Course updates:
◇ Courses are now unlocked in the game after reaching a certain account level, rather than clearing story stages.
◇ We’ve modified the missions in Growth Plan-I, Growth Plan-II, and Recon Plan-I. Courses for Recon Plan-II are now closed.
◇ We’ve adjusted the rewards for some Courses.

7. Instance changes:
◇ We’ve significantly increased the drop rate for 6-Star Relics in the Ritual Miracle on difficulties 9 and 10, the latter by 50%.
◇ We’ve increased the difficulty of the Ritual and Sonic Miracles (increasing boss HP and damage).
◇ The Ritual and Sonic Miracles will no longer drop additional Starimon and Experimon following this update.
◇We’ve adjusted the Spatial Tower’s difficulty and stage rewards.

8. Stamina changes:
◇ The system will now give more Stamina after levelling up an account.
◇ We’ve adjusted the cost to purchase Stamina from 60 to 100 Nexus Crystals, starting from the 2nd purchase everyday.

10. Bag optimizations:
◇ Relics can now be enhanced/sold/shared directly from your Bag.
◇ You can now view the number of Esper fragments in your Bag. 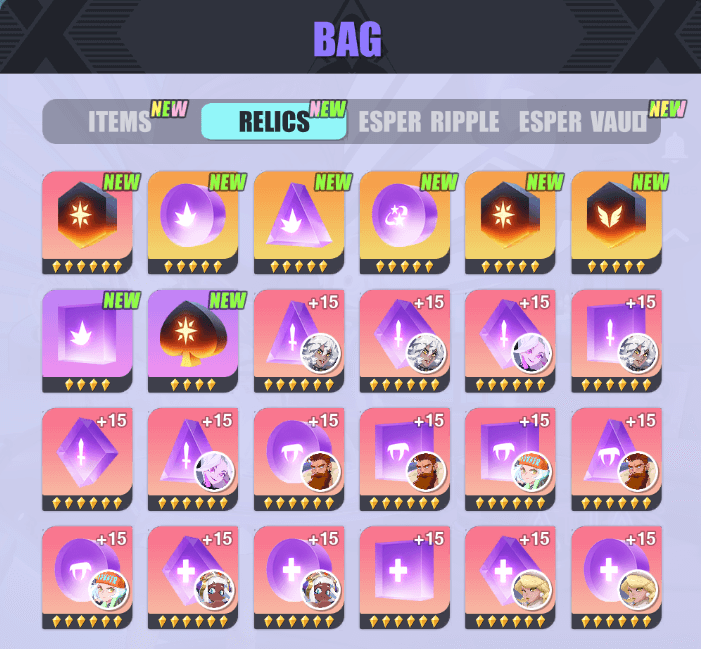 11. Newbie event-related changes:
◇ We’ve updated the rewards for the first two items under the Trainee Milestones event, and also reduced the eligibility requirement for the former (Lvl 10 → Lvl 7).
◇ Some missions and rewards have been changed in the Path to Mastery event.

12. Improvements to the world chat system:
◇ World Chat channels are now allocated based on players’ current in-game language selection following this update. Players can still manually choose another channel by entering its code.
◇ We’ve added a new chat mechanism: players can tap the screen to enable/disable a rolling chat notification at the top of the screen.

15. Expedition changes:
◇ We’ve reduced the amount of Stamina required to go on Expeditions as well as the associated rewards.
◇ Expedition requirements on Espers are now focused on just level rather than Star Level following this update, that is, Espers meeting the level requirement can go.

17. We’ve adjusted 1 of the 3 guaranteed Espers drawn from the Newbie Pool within 10 Gold Records from Biondina (Poseidon) to Lewis (Ares).

18. The rarity of Experimon in the E-cash Shop now matches a player’s progress.

Ability 2 (Passive) changes:
Before: the caster’s attacks mark the target with the Eye of Horus for 1 turn. Attacks by enemies with this Mark will be counterattacked.

Now: the caster’s attacks mark the target with the Eye of Horus for 1 turn. When any ally is attacked by enemies with this Mark, they will counterattack.
No changes after ascension.

Ability 2 changes:
Before: attacks an enemy twice, each dealing damage equal to 100% of ATK with a(n) 75% chance of inflicting Stun for 1 turn.

Now: launches a two-pronged attack on an enemy target, each dealing damage equal to 100% of ATK with a(n) 75% chance of inflicting Stun for 1 turn. The final attack steals 25% AP, which is shared team-wide.

Now: deals damage to a target equal to 100% of ATK, and converts 50% of damage dealt in this attack to healing. If a critical hit is triggered, then AP increases by 20%.

Ability 2 changes:
Before: deals damage to 1 enemy equal to 160% of ATK at the cost of 40% of current HP, and grants a bonus turn.

Now: gains a C. RATE Up buff for 2 turns and damages a target for 160% of ATK. Gains a bonus turn if a crit is triggered.

Ability 3 changes:
Before: attacks a target three times, dealing total damage equal to 230% of ATK plus 10% for every 5% HP lost.

Now: attacks a target three times, dealing total damage equal to 230% of ATK plus 10% for every 6% HP lost.
No changes after ascension.

Ability 2 (Ascended) changes:
Before: doubles the healing amount if the target has less than 50% HP and grants an extra 2 turns of Recovery.

Now: grants Recovery to the target for 1 turn, which increases by an additional turn if the target’s HP is below 50%.

4. We’ve added the Newbie Special Offer series of gift packs, with premium access to plenty of Gold Records and Power UP items.

E-cash Supplies $9.99, limited to 3 purchases.
Contains: 50 Nexus Crystals and 1500K E-cash
All of the above-mentioned gift packs can be purchased from the Mall after the update.

1. Fixed an issue preventing sound FX from playing around the Fafnir, Isis, and Calypso characters.

2. Fixed a problem preventing the Fafnir Showdown Guild Mission from being completed.

3. Fixed an issue where enemies to defeat Isis would have their AP and queue position recalculated.

We will be introducing 3 new Espers in the next update, new “Esper Probability UP” and other events, and an all-new Relic crafting system. Stay tuned!